The ITB School of Pharmacy was founded on October 6, 1947,under the name of the Department of Pharmacy, under Faculteit voor Wiskunde and Natuurwetenschapen. At that time, this faculty was part of the University of Indonesia. On February 1, 1949this faculty was changed to the Faculty of Science and Natural Sciences (FIPIA), but remained under the University of Indonesia. The organizational structure of the Department of Pharmacy is very simple, only one person is responsible for managing the department, but since 1959the organization has grown and a secretary was appointed to assist the head of the department. 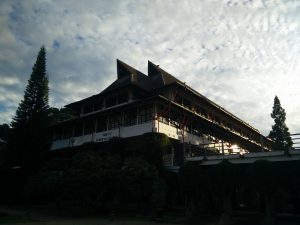 Until 1987the Department of Pharmacy consisted of 5 scientific divisions, namely Pharmaceutical Chemistry, Formulation, Pharmaceutical Biology, Pharmacology, and Basic and Additional Sciences. Each section is a related science, or scientific and applied group in the field of pharmacy. These sections cover theory, practice, and research. In each section there are several courses that are supervised by a staff as the head of the section who is responsible for organizing and developing his section in the lectures given, laboratory practice, and managing research projects. Each laboratory is regulated and supervised by the head of the laboratory, and each staff in the department has their own responsibilities in giving lectures, assisting practicums, and guiding student research projects. This academic organization slowly develops and improves, and now the school has 5 group of expertises, namely Pharmaceutics, Pharmacochemistry, Pharmacology, Clinical Pharmacy . Pharmaceutical Biology dan Sport Science.

In early 1947, students who were accepted into the Department of Pharmacy were graduates of class B schools, such as HBS, AMS, VHO or high school. The languages used in the lectures are Dutch and English. The length of study is 5.5 years, consisting of 3 years at the Baccalaureate stage and 2.5 years at the Bachelor stage (S-1). Graduates have the opportunity to continue further education (S-3) if they have worked on at least one major subject (hoofdvak) and two minor subjects (bijvak). For example, major subjects are chemistry, and minor subjects are botany, zoology, and physics. The curriculum is not well structured and there is no limit on the length of study. Starting in 1951, several subjects were added to the curriculum according to the needs of the education system.

Because the presence of pharmacists in Indonesia is unsatisfactory, the government through the Ministry of National Education of the Republic of Indonesia issued a regulation on the length of pharmacy study in universities, which is 4 years, consisting of 1 year of preparation stage, 1 year of education for pharmacist candidates, and 2 years of pharmacy education.

in 1960the length of pharmacy education changed to 6 years, namely 5 years of undergraduate education and 1 year of professional education. The curriculum is changed and adapted to the needs of the education system. Several new courses were included in the curriculum, such as English, Military Education, Prescription Science, and others.

in 1973there was a significant development at ITB. All new students are entered into the Joint Preparation Stage (TPB), they cannot get education in any department until they pass the TPB. At this time the semester credit system (SKS) applies. Students can choose the desired course with a maximum number of 24 credits per semester. This system makes it easier for students to develop their own abilities while completing education. Then, the curriculum is changed every 5 years, arranged based on the development of science and technology in Indonesia. The current curriculum is the 2013 curriculum.